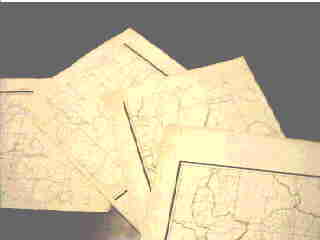 [FY 1995 Special Collection]
This is a detailed map of the Russian Empire and its adjoining foreign countries presented to Alexander I by the Imperial Map Depot. Produced using etching, it consists of 107 individual parts measuring 400 mm by 350 mm, and has been preserved in excellent condition. The most prominent characteristic is the level of detail, which is shown on a scale of 70 Russian miles (approx. 75 km) per 100 mm. As a result, villages and other settlements in residential areas and even ranks of their churches are indicated, in addition to information on terrain, roads and how cultivated areas were used.

The detailed map of the Russian Empire and its adjoining foreign countries (Подробная карта Россійской Имперіи и близь лѣжащихъ заграничныхъ владѣній), which has been added to Hokkaido University Library’s collections, was edited and printed by Депо карт (the Russian Military’s Map Editorial Bureau) from 1801 to 1804. 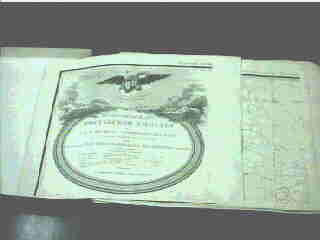 The map covers Russia and its adjoining areas except for Siberia – Baku in Azerbaijan, Tiflis (now Tbilisi) in Georgia and Sofia in Bulgaria to the south, Khiva in Central Asia, the Aral Sea and Tobolsk in Western Siberia to the east, and Toruń in Poland and Belgrade in Serbia to the west. With a scale of 1:840,000, an inch equals 20 Russian miles (approx. 21.3 km). The representation uses monochrome printing with copper plates, and national/provincial borders were added later using watercolors. This scale of reduction was not sufficient for detailed operational planning, but was enough to include all villages, for example.

National and provincial borders, rivers, major roads, cities, villages, forts, defense lines against nomads and the like are shown. As for villages, marks were used to differentiate село (with churches) from деревня (without churches) and those with a population of 500 people or more from those with fewer. Altitude values are not indicated on the map, no contour lines are used, and mountainous areas are expressed as a bird’s eye view.

No projections are indicated. Although the map is considered to use a type of conic projection, I have been unable to identify it.

Of the 107 maps in total, the first sheet is the cover and also shows a map of the northwestern end. The second to the fifth pages are a type of table of contents showing the connections between map numbers and corresponding areas. The layout is such that four sheets are put together to create a square shape. The sheets after the sixth one are the detailed map parts, and are also to be arranged with four sheets forming a square. Those from 105 to 107 are representations of areas not previously available – Nakhchivan in the Caucasus and Khiva in Central Asia.

The map is believed to be based on reports of general surveys conducted in each province during the reign of Ekaterina II.

Geodetic mapping in Russia was initiated in the early 18th century under the reign of Peter the Great. The results of such surveys and investigations can be seen in atlases published in 1745, for example, but this material clearly indicates that not all maps were prepared using survey data. From 1765, under the reign of Ekaterina II, general surveys and investigations were started in each provincial area, and detailed geographical information was accumulated by the central government. Such materials are still stored in Russian archives and are considered first-rate historical materials for research on the historical geography of European Russia.

This map makes me consider the breadth of Russians’ life space and their accumulation of geographical knowledge in those days. In the southeastern part of Russia, nomadic land covers large areas. This boundary between nomads and agricultural people shifted significantly southeastward within the space of a century.

The accuracy of the information here, which varies from place to place, would reflect that of geographical data obtained by the Russian government in those days. Gathering materials from abroad might have been difficult, as information about other countries lacks detail. Information on the left bank of the Vistula River (in what is Poland today) is not as detailed as that on the right bank. Information on Austria and Turkey is scant, and that on Russia’s surrounding areas (such as northern Russia, the northern Caucasus and the left bank of the Volga River) is also brief. The territories represented in the third division of Poland are minutely detailed.

We can also see geographical changes from these examples. For instance, the shape of the Caspian Sea’s northern area is quite different from what we see today, suggesting that it used to be much broader.

Map publication was under tight governmental control during the period of Imperial Russia, and such items became available on the market in the latter half of the 19th century during the reign of Alexander II. The number of maps produced before this time was extremely small, making them hard to obtain. I am unaware of any other library in Japan that has maps from the period of Imperial Russia with a level of detail sufficient to allow identification of individual villages. Even in the West, only a small number of major libraries have such maps.

With this piece, Hokkaido University Library has obtained a valuable, outstanding tool that will prove useful in studying the historical geography of Russia.