The Epstein Collection on the Foreign Relations of Soviet Union.

The Epstein Collection on the Foreign Relations of Soviet Union. 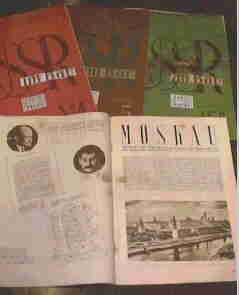 [FY 1982 Special Collection]
This is a collection of materials assembled across a wide range of research fields by Fritz T. Epstein (1898 – 1979), and includes many comprehensive materials on the history of relations between Germany and the Soviet Union in particular.

Fritz T. Epstein was born in Germany in 1898. After receiving a PhD from the University of Berlin, he lived a scholarly life in Germany and the U.S. until his passing at the end of 1979. He accomplished great achievements in Russian history (e.g., research on national government organizations in the 16th century), the history of foreign policies (e.g., the Allied intervention in the Russian Civil War between 1917 and 1920, research on relations between Germany and the Soviet Union between 1939 and 1941), bibliography work (e.g., bibliographies relating to East Germany and Russian/USSR history). The Epstein Library, whose composition reflects his academic interests, consists of two major parts. First, it includes approximately 1,700 documents concerning Germany’s Eastern European policies published in Western languages in and after 1900. Its German documents published before 1945 are particularly valuable. Secondly, it contains roughly 600 publications issued in Russian after World War II on the history of foreign policy, including a small number of Russian documents published before 1930. Many of these were published in rural areas in the Soviet Union, and the majority of them have not previously been available in Japanese libraries.